The chemical element technetium is classed as a transition metal. It was discovered in 1937 by Carlo Perrier and Emilio Segrè.

Emilio Segrè, who in 1937 found technetium in a sample of molybdenum which had been bombarded with deuterium nuclei. This technetium was the first instance of a new element to be synthesized in the laboratory. Image from LBNL.

Technetium’s existence was first predicted by Russian chemist Dmitri Mendeleev, creator of the periodic table. He realized there was a gap in the group 7 transition elements between manganese and ruthenium, and called the element eka-manganese. (2)

In the belief that they had achieved their goals, they published X-ray analysis evidence and claimed they had found two new elements. They named element 43 masurium, after the region of Masuria in Prussia where Noddack was born.

Both discoveries were widely disputed when first announced.

Three years later their discovery of element 75, rhenium, was verified while masurium was not. (4)

Today, it has been speculated that Tacke, Noddack and Berg actually did succeed in discovering element 43, now known as technetium. Their samples would have contained uranium, which could have decayed to form technetium-99.

A 1999 study by Dave Curtis and colleagues at Los Alamos National Laboratory, New Mexico reproduced the original researchers’ experiment and obtained very similar results, suggesting that the 1925 discovery could have been correct. (5)

Credit is usually given for the first discovery of technetium to Carlo Perrier and Emilio Segrè in 1937 at the University of Palermo, in Sicily, Italy.

Perrier and Segrè were given a sample of molybdenum by Ernest Lawrence which had been bombarded with deuterium nuclei. They found several technetium isotopes in the sample which were all radioactive. (4)

Technetium was the first element to be produced synthetically.

It is named after the Greek word ‘technètos’ meaning artificial.

Technetium was once thought to exist only in samples produced in the laboratory. However, its spectral lines have now been observed in red giant stars, such as Betelgeuse, shown below.(1) 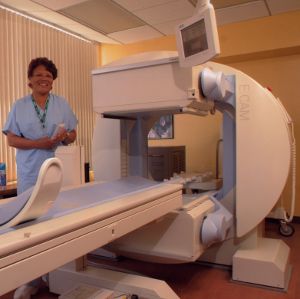 A gamma camera and its nuclear medicine operator. Image by Brendaicm.

Technetium’s Periodic Table Neighborhood
Technetium has no stable isotopes – the lightest such element. It is surrounded in the periodic table by elements with stable isotopes.

Technetium is harmful due to its radioactivity.

Technetium is a rare, silver-gray metal that tarnishes slowly in moist air.

In powder form, it burns in oxygen to form the heptoxide (Tc2O7).

Technetium dissolves in nitric acid and concentrated sulfuric acid, but is not soluble in hydrochloric acid of any strength.

Is an excellent superconductor at temperatures of 11 K and below.

Technetium and promethium are unusual among the light elements, because they have no stable isotopes.

Technetium-95, with a half-life of 61 days, is used as a radioactive tracer.

Technetium-99, has a very long half-life (2.11 X 105 years) and decays almost entirely by beta decay with no gamma rays. It is used as for equipment calibration.

In small concentrations TcO4–, the pertechnetate ion, can protect carbon steels and iron from corrosion. This use is limited to closed systems due to its radioactivity.

Isotopes: Technetium has 26 isotopes whose half-lives are known, with mass numbers from 88 to 113. None are stable. The most stable isotope is 98Tc, with a half-life of 4.2 million years.