The chemical element tellurium is classed as a chalcogen and a metalloid. It was discovered in 1798 by Martin H. Klaproth. 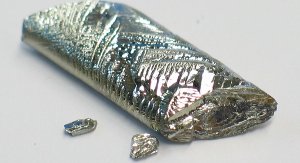 The mineral ore calaverite. Calaverite is also known as gold telluride, AuTe2. It is the mineral tellurium was discovered in. Image by Robert Lavinsky. (2)

In the 1700s, scientists were confused by a substance found in various ores.

Although they could not isolate the substance, the properties of the ores seemed to indicate that that the substance had both metallic and non-metallic properties.

In 1782, Austro-Hungarian mineralogist Baron Franz Muller von Reichenstein purified a substance, which he believed to contain antimony, from a Transylvanian gold ore. (We now know this ore was actually gold telluride, AuTe2, often known as calaverite.)

Muller came to believe that his initial thoughts were wrong and that he might be dealing with a new element. (3)

He sent a small sample to Torbern Bergman in Uppsala, Sweden, who replied in April 1784, agreeing that the substance did not contain antimony. Bergman asked for more samples so that he could study the substance further, but he died in July of that year. (4)

Twelve years later, Muller sent a sample to Martin H. Klaproth in Berlin, who isolated the tellurium. In 1798, Klaproth publicly confirmed the existence of a new element in the sample sent to him by Muller.

It took a further 34 years for the chemistry of tellurium to be investigated.

In 1832, in Stockholm, Sweden, Jons Jacob Berzelius made a detailed study of the element and its compounds. He decided that tellurium was a metal, but belonged in the same group as the nonmetals sulfur and selenium due to the similarities of their compounds. (5)

We now class tellurium as a metalloid because, as the confused scientists of the 1700s first noticed, it has properties that sit between those of metals and nonmetals.

Cadmium telluride (CaTe) is used as a thin film in solar panels, converting sunlight to electricity. These solar panels are more efficient than amorphous silicon alternatives. Image from NREL.

Tellurium is very toxic and teratogenic (can cause harm to developing embryos). Exposure to as little as 0.01 mg/m2 or less in air leads to “tellurium breath”, which has a garlic-like odor.

It burns in air with a greenish-blue flame and forms white tellurium dioxide (TeO2).

When present in compounds, tellurium exists mostly in the oxidation state IV and VI.

Tellurium is a semiconductor material and is slightly photosensitive.

It forms many compounds corresponding to those of sulfur and selenium, the elements above it in the periodic table. For example, it forms tellurides with other metals and tellurite (TeO32-) and tellurate (TeO42-) compounds.

Tellurium has radioactive isotopes and is the lightest element to exhibit alpha decay.

Tellurium is alloyed with copper and stainless steel to make these metals more workable.

It is added at very low levels to lead to decreases the corrosive action of sulfuric acid in batteries and to improve the lead’s strength and hardness.

Tellurium is used as a coloring agent in ceramics.

Tellurium is also used in the electronics industry, for example with cadmium and mercury to form photosensitive semiconductors. Cadmium telluride (CdTe) is used as a thin film in solar panels to convert sunlight into electricity. CdTe panels have an efficiency rating of between 11 and 13 percent compared to amorphous silicon solar panels which have an efficiency of between 7 to 9 percent. (6)

It is used in vulcanizing rubber and in catalysts for petroleum cracking and in blasting caps for explosives.

Source: Tellurium is sometimes found free in nature. More commonly, it is found combined with metals, such as in the minerals calaverite (gold telluride, AuTe2) and sylvanite (silver-gold telluride). Commercially, tellurium is obtained as a byproduct of electrolytic copper refining.