The chemical element palladium is classed as a transition metal. It was discovered in 1803 by William H. Wollaston.

Palladium was discovered in 1803, in London, by English chemist William H. Wollaston (who also discovered rhodium in the same year).

He examined the residues left from platinum after dissolving it in aqua regia, a concentrated solution of hydrochloric and nitric acids. He then isolated palladium in a series of chemical reactions, finally heating palladium cyanide to extract palladium metal.

Wollaston shared his discovery in an unconventional manner. He left a quantity of the metal for sale with a mineral dealer in Gerrard Street, London, and anonymously posted handbills throughout the city, describing the new metal’s properties.

Suspicions over this uncommon method of announcement arose and Richard Chenevix, a celebrated chemist at the time, declared palladium to be a platinum-mercury alloy. (2)

In response, Wollaston anonymously offered a reward of twenty guineas to anyone who could artificially produce palladium. Nobody ever claimed this money.

In 1805, Wollaston spoke before the Royal Society of London about palladium’s properties and how it could be isolated from platinum. He finished his talk by revealing himself to be the discoverer of palladium.

He explained that he had remained anonymous so that he would have the time to understand and explain all of the metal’s properties before putting his name to an account. (3)

The element is named after the then-recently discovered asteroid, Pallas. The asteroid’s name refers to the ancient Greek goddess of wisdom. (4) 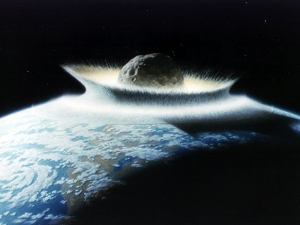 It is possible that a number of Earth’s metals arrived by asteroid and comet impact after the planet had already formed, explaining why the dense metals palladium, gold and platinum are available relatively close to our planet’s surface. Image by NASA. 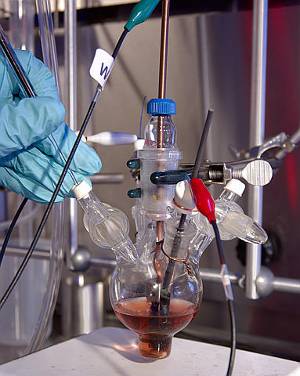 Palladium is commonly used as a catalyst. Here it is used to catalyze the reduction of carbon dioxide to carbon monoxide. Image by PNL.

Palladium is considered to be of low toxicity.

Palladium is malleable and ductile and like gold, it can be beaten into thin leaf.

It does not tarnish in air but does tarnish lightly in moist air containing sulfur.

The metal is strongly resistant to corrosion in air and to the action of acids (except nitric acid) at ordinary temperatures.

When present in compounds, palladium exists mostly in the oxidation state II.

Palladium is remarkable in its capacity to absorb up to 900 times its own volume of hydrogen. As it absorbs the hydrogen, it expands visibly, like a sponge swelling up when absorbing water.

The largest use of palladium is in catalytic converters for automobiles.

Finely divided palladium is used as a catalyst for hydrogenation/dehydrogenation reactions and for petroleum cracking.

The metal is used in jewelry, for example in white gold (an alloy of gold decolorized by the addition of palladium).

Palladium is used in dentistry, watch making, and in making surgical instruments and electrical contacts.

It is also used to purify hydrogen because the gas easily diffuses through heated palladium.

Abundance solar system: 3 parts per billion by weight, 40 part per trillion by moles

Source:Palladium occurs in nature as a free metal and also alloyed with gold, platinum, and other platinum group metals. Commercially, it is produced from nickel–copper ore deposits where it is found in small quantities.