The chemical element radon is classed as a noble gas and a nonmetal. It was discovered in 1900 by Fredrich E. Dorn.

Radon gas was discovered in 1900 by Fredrich E. Dorn in Halle, Germany. He described it as radium emanation because it arose from the element radium, which he was working with.

In 1908 William Ramsay and Robert Gray isolated the gas and named it niton.

Since 1923, it has been called radon (after radium, one of its sources).

Radon was one of the earliest discovered radioactive elements, identified after uranium, thorium, polonium and radium.

The image below shows the average radioactivity intensity in the world’s atmosphere caused by radon. 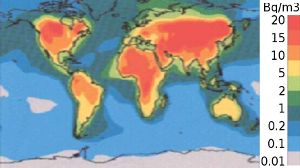 Radon is the number one hazard in the home.

Radon is highly radioactive and a carcinogen. Its decay products are toxic and radioactive. Radon is present in most homes and is the number one cause of lung-cancer in non-smokers in the USA. (See video on left.)

Radon is one of the noble gases; hence it is a chemically inert, monatomic gas.

It is also radioactive, colorless and odorless.

Radon is produced naturally by the decay of uranium’s decay products, such as 226Ra.

Radon was used for treating cancer by radiotherapy. Safer treatments are now available.

Source: Radon is produced naturally by the radioactive decay of uranium and other elements, such as radium. For example, 222Rn is produced by the decay of radium (226Ra).

Isotopes: Radon has 33 isotopes whose half-lives are known, with mass numbers 196 to 228. None are stable. The most stable isotope is 222Rn, with a half-life of 3.8 days.