The chemical element plutonium is classed as an actinide metal. It was discovered in 1940 by Glenn Seaborg, Edwin McMillan, Joseph Kennedy, and Arthur Wahl. 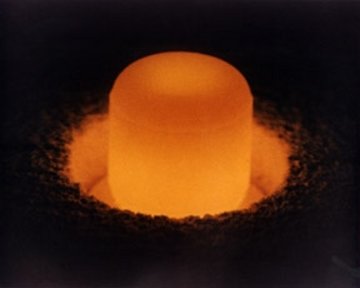 Plutonium-238 (plutonium oxide). Nuclear fission reactions release enough energy to increase the temperature of this sample of plutonium to red-heat. The heat produced by plutonium has been used as an energy source on spacecraft. Photo: Department of Energy.

Plutonium was first produced in 1940 by Glenn Seaborg, Edwin McMillan, Joseph Kennedy, and Arthur Wahl. It was the second synthetic transuranium element of the actinide series to be discovered.

Plutonium-238 (half-life 87.7 years) was produced by deuteron bombardment of uranium-238 in the 60-inch cyclotron in Berkeley, California.

The new element was identified chemically.

The metal was later found naturally in minute quantities as a decay product in uranium ores.

In the same year it was found that slow neutrons cause plutonium-239 to undergo fission. The fission releases more neutrons, hence can result in a nuclear chain reaction. (See uranium for more about chain reactions.)

This discovery would lead to the use of plutonium as a source of nuclear energy. (2)

A microgram of pure plutonium-239 compound (plutonium IV iodate) was isolated in 1942 by Burris Cunningham and Louis Werner at the Metallurgical Laboratory of the University of Chicago.

This was the first time a compound of an artificially produced element had been made in a visible quantity, allowing detailed studies of its properties. (1), (2)

The metal was first isolated in 1943 by reducing plutonium trifluoride with lithium. A few small globules of silvery metal weighing 1-3 micrograms each were produced. (3) 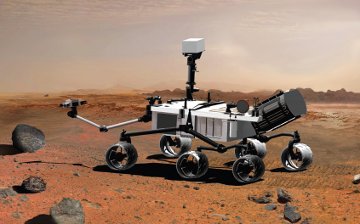 On Nov. 26, 2011 NASA launched ‘Curiosity’, the largest, most capable rover ever sent to another planet. Radioactive decay of 10.6 pounds (4.8 kilograms) of plutonium dioxide has produced a steady flow of heat to warm the rover’s systems during the intensely cold Martian night and allowed electricity to be generated. Image: NASA. 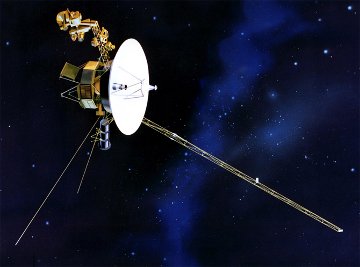 The Voyager 2 spacecraft, launched on Aug. 20, 1977, is about 17 billion kilometers (10 billion miles) from the sun. It is the longest continuously operating NASA spacecraft. It owes its long life to radioisotope thermoelectric generators; these generate electricity from heat flowing from plutonium-238’s radioactive decay. Image: NASA.

Radioactive decay of plutonium-238. Each decay produces uranium-234, an alpha-particle and a large amount of energy. Image: NASA.

The separation of uranium from plutonium.

Plutonium is harmful due to its radioactivity.

Plutonium and its compounds are also toxic. It collects in the bones and the liver where it can remain for a long period of time. (4)

Plutonium is a silvery radioactive metal that tarnishes in air to give a yellow oxide coating.

It has six allotropic forms, which vary widely in crystal structure and density.

The metal is chemically reactive, forming compounds with carbon, nitrogen, and silicon and the halogens.

Plutonium has five oxidation states (+3 to +7). These produce different colors in solution. For example, in 1 M perchlorate:

If you were to touch a small piece of plutonium metal (please don’t!) it would feel warm because of the energy released by alpha decay. A larger piece of the metal could boil water.

Plutonium-239, which can undergo nuclear chain reactions, is used in nuclear bombs and nuclear reactors

The image on the left shows the decay of one atom of plutonium-238. This releases 5.6 million electron volts of energy. To get an idea of what this means, consider NASA’s Curiosity Mars rover, which will be powered by 4.8 kg of plutonium dioxide.

During its first 87.7 year half-life, the plutonium will produce about 4800 gigajoules of energy. To generate the same energy using natural gas (mainly methane) the Mars rover would need to carry about 86 metric tons of methane and 345 metric tons of oxygen.

Source: Plutonium is found naturally in minute quantities in uranium ores. Commercially, it is produced in large quantities in nuclear reactors from 238U.