The chemical element niobium is classed as a transition metal. It was discovered in 1801 by Charles Hatchett. 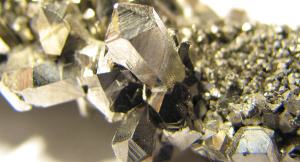 Niobium was discovered in 1801 by English scientist Charles Hatchett. It was found in an American ore that had been sent to England more that a century earlier by John Winthrop the Younger, the first governor of the state of Connecticut.

Hatchett found the ore, called columbite, in the Hans Sloane collection of the British Museum.

In 1846 German chemist Henrich Rose independently discovered the element and named it niobium.

The metal was first isolated by Swedish scientist Christian Blomstrand in 1864. He reduced the chloride by heating it in a hydrogen atmosphere.

The name niobium was adopted internationally in 1950.

The element name comes from ‘Niobe’ meaning daughter of Tantalus in Greek mythology. Niobium sits directly above tantalum in the periodic table, and they share very similar chemical properties. Tantalum was named after Tantalus, father of Niobe.

Superconducting niobium cavities, made by the Jefferson Laboratory for use in particle accelerators. (More in the video below.)

Some niobium compounds are highly toxic.

Niobium is a shiny, white, ductile metal. In air an oxide layer forms whose color depends on its thickness. Shades of blue, green and yellow are typical.

Niobium resists corrosion due to the oxide film. The metal starts to oxidize rapidly in air at 200 oC.

Niobium’s chemical properties are very similar to those of tantalum.

Niobium is used with iron and other elements in stainless steel alloys and also in alloys with a variety of nonferrous metals, such as zirconium,

Niobium alloys are strong and are often used in pipeline construction.

The metal is used in superalloys for jet engines and heat resistant equipment.

Niobium is also used for jewelry. At cryogenic temperatures, niobium is a superconductor.

Abundance solar system: 4 parts per billion by weight, 50 part per trillion by moles

Source: Niobium is not found free in nature but in minerals such as columbite and tantalite. Minerals that contain niobium often also contain tantalum. Commercially, niobium is extracted by first forming the oxide (Nb2O5). The oxide is then reduced using carbon or hydrogen.

Isotopes: Niobium has 28 isotopes whose half-lives are known, with mass numbers from 83 to 110. Naturally occurring niobium consists of its one stable isotope, 93Nb.