The chemical element cesium is classed as an alkali metal. It was discovered in 1860 by Robert Bunsen and Gustav Kirchhoff. 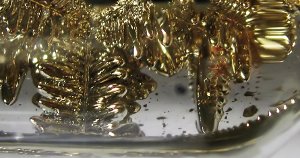 Basic flame emission spectra similar to those that Bunsen and Kirchoff saw. The top spectrum is potassium, with the distinctive violet line. For cesium, the twin sky blue lines showed a new element was present.

Cesium was the first element discovered using a spectroscope.

It was discovered by Robert Bunsen and Gustav Kirchhoff in 1860 in Heidelberg, Germany, when they analyzed the spectrum of mineral water.

A year earlier, Bunsen and Kirchhoff had developed the spectroscope. The device was based on a prism which separated light from a flame into a rainbow of colors.

In every spectrum they looked at, Bunsen and Kirchhoff found colored lines. They realized that these lines were unique to the substance being burnt.

When studying the spectrum of spa mineral water residue, they found a series of colored emission spectra lines that did not correspond to any known element.

Bunsen and Kirchhoff named the element cesium, from the Latin word ‘caesius’ meaning sky blue, after the blue lines they saw in the spectrum.

The Latin spelling is still reflected in British English where cesium is spelt ‘caesium.’

In 1861 Bunsen and Kirchhoff also discovered rubidium by the same method.

Cesium must be kept under an inert liquid/gas or in a vacuum to protect it from air and water. Cesium compounds are considered to be mildly toxic.

Cesium is one of the few metals that is liquid near room temperature. The others are gallium, francium and mercury.

Cesium is an extremely reactive metal and the most alkaline of the elements. It reacts explosively upon contact with water producing cesium hydroxide (CsOH), an extremely strong base that can rapidly corrode glass.

Cesium is used in atomic clocks, which are incredibly accurate. NIST-F2, America’s primary time and frequency standard, is a cesium fountain atomic clock developed at the NIST laboratories in Boulder, Colorado. NIST-F2 contributes to the international group of atomic clocks that define Coordinated Universal Time (UTC), the official world time. As scientists continue to improve its technology, uncertainty in NIST-F1’s measurement of time is continually improving. Currently it neither gains nor loses as much a second in more than 300 million years. See also strontium.

Cesium is also used in photoelectric cells and as a catalyst in the hydrogenation of organic compounds. The metal is used as a ‘getter’ in vacuum tubes.

Abundance solar system: 8 parts per billion by weight, 70 parts per trillion by moles

Source: Cesium is found in the minerals pollucite and lepidolite. Commercially, most cesium is produced as a byproduct of the production of lithium metal. More than two-thirds of the world’s reserves of Cesium – 110,000 tonnes – are found at Bernic Lake, Manitoba, Canada.

Isotopes: Cesium has 36 isotopes whose half-lives are known, with mass numbers 112 to 148. Naturally occurring cesium consists of its one stable isotope, 133Cs.