The chemical element polonium is classed as a chalcogen and a metalloid. It was discovered in 1898 by Marie and Pierre Curie. 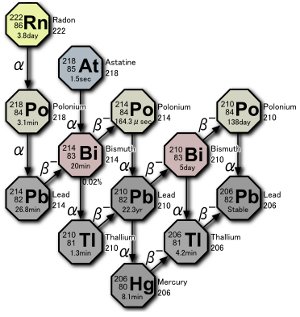 Part of the uranium decay series. Three isotopes of polonium are produced in nature, either by the decay of radon gas itself or by the decay of atoms resulting from radon’s decay. Image by Tosaka.

Polonium was the first element discovered by Marie and Pierre Curie.

They discovered polonium and then radium in 1898 in Paris, while investigating radioactivity in pitchblende (uranium oxide).

They wrote: “We believe the substance we have extracted from pitchblende contains a metal never known before, similar to bismuth in its analytic properties. If the existence of this new metal is confirmed, we suggest that it should be called polonium after the name of the country of origin of one of us.”

In accordance with the Curies’ wishes, polonium is named after Poland, where Marie Curie was born and grew up.

The dangers of working with radioactive elements were not known when the Curies made their discoveries. Their laboratory notebooks from this time are so radioactive that they are now stored in a lead-lined case. (1)

Polonium is harmful both through its chemical toxicity and its radioactivity. Polonium-210 is an alpha emitter. As such it is very hazardous if swallowed or inhaled. Exposure to polonium increases the risk of getting various cancers.

Polonium readily reacts with dilute acids, but only slightly with alkalis.

All of its isotopes are radioactive.

210Po emits a blue glow, as the air around it is excited by the decay products. 1 gram of Po emits as many alpha particles as 5 kilograms of radium.

The alpha rays emitted by polonium can be used to eliminate static electricity produced during processes such as rolling paper, wire, and sheet metal. However, beta ray sources are more commonly used as they are less dangerous.

210Po can be used as an atomic heat source, but because of the isotope’s short half-life (138.4 days), it doesn’t provide power for long-term uses.

Polonium is also used in anti-static brushes to eliminate dust on photographic film. It is sealed in brushes to control the radioactive emissions.

Abundance earth’s crust: Of the order of 1 part per quadrillion.

Source: Polonium is a very rare element due to the short half-life of all its isotopes. It is found in uranium ores in minute quantities. It can be obtained by bombarding natural bismuth, 209Bi , with neutrons to give 210Bi, which then decays to 210Po via β decay. Approximately 100 g of polonium is synthesized each year.

Isotopes: Polonium has 29 isotopes whose half-lives are known, with mass numbers 190 to 218. None are stable. The most stable isotope is 209Po, with a half-life of 102 years.