The chemical element europium is classed as a lanthanide and rare earth metal. It was discovered in 1901 by Eugène-Antole Demarçay. 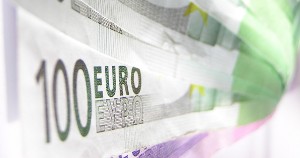 Fittingly, europium is used in the euro currency as an anti-forgery measure. Shining UV light on a euro results in red fluorescence from europium Eu3+, blue from thulium Tm3+ and green from terbium Tb3+.

The story of Europium’s discovery begins with the discovery of another element – samarium.

French chemist Paul-Émile Lecoq de Boisbaudran claimed to have isolated samarium in 1879; others believed that one or more other new rare earth elements were present in Boisbaudran’s sample.

In 1886, French chemist Eugène-Antole Demarçay identified spectroscopic lines in ‘samarium’ caused by the element we now know as europium. (1)

He achieved this using a new spectroscope he had developed to study the rare earths.

Demarçay’s spectroscope had a special induction coil which produced a very high spark temperature and used platinum electrodes to remove all other spectral lines. (2)

Demarçay’s spectral results were disputed and he realized that he needed further proof.

He obtained this in 1901, when he successfully isolated europium using repeated crystallizations of samarium magnesium nitrate. (1),(3)

He named the new element after the continent of Europe.

Europium is used to produce blue, red and white radiances in computer monitors and television screens. It is also used in energy efficient light bulbs.

Europium is a soft, ductile, silvery-white metal that instantly oxidizes in air.

It is the most reactive of the rare earth metals and ignites in air at temperatures in excess of 150 oC to 180 oC.

In water it reacts in a similar way to calcium, producing europium hydroxide and hydrogen gas.

Europium oxide (europia) is widely used as a doping agent in phosphors in television sets and computer monitors: valency three europium produces a red radiance and valency two europium produces a blue radiance. When both valencies are combined a white light is produced which is used in compact fluorescent bulbs.

Europium is also used in phosphors in anti-forgery marks on Euro bank notes.

Abundance solar system: 0.5 part per billion by weight, 4 parts per trillion by moles

Source: Europium is not found free in nature but is found in a number of minerals mainly monazite, bastnaesite and xenotime. Commercially, europium is isolated by ion exchange and solvent extraction. The pure metal can be produced by the electrolysis of the molten chloride with sodium chloride.

Isotopes: Europium has 30 isotopes whose half-lives are known, with mass numbers 131 to 162. Naturally occurring europium is a mixture of its two stable isotopes, 151Eu and 153Eu with natural abundances of 47.8% and 52.2% respectively.