The chemical element hassium is classed as a transition metal. It was discovered in 1984 by a team led by Peter Armbruster and Gottfried Münzenber. 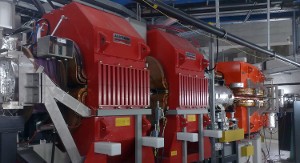 New elements can no longer be discovered in test-tubes. This is the Experimental Storage Ring, forming part of the equipment used in heavy element research at Darmstadt. Image Ref. (1)

Hassium was first made by a team led by Peter Armbruster and Gottfried Münzenber at the Heavy Ion Research Laboratory in Darmstadt, Germany in 1984.

They bombarded lead-208 with iron-58 nuclei to produce three atoms of hassium.

The name hassium is derived from the Latin name for the German state of Hesse.

Hassium is harmful due to its radioactivity.

Hassium is a synthetic, radioactive metal and has only been produced in tiny amounts.

Hassium is of research interest only.

Abundance solar system: parts per billion by weight, parts per trillion by moles

Source: Hassium is a synthetic, radioactive metal, created via nuclear bombardment. It has only been produced in minute amounts. Hassium is produced by bombarding 208Pb with 58Fe.

Isotopes: Hassium has 12 isotopes whose half-lives are known, with mass numbers from 263 to 277. None are stable. The most stable isotope is 269Hs, with a half-life of 9.7 seconds.