The chemical element californium is classed as an actinide metal. It was discovered in 1950 by Stanley Thompson, Kenneth Street, Albert Ghiorso and Glenn Seaborg. 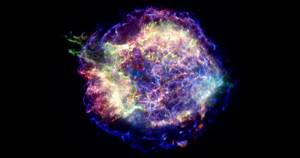 The spectrum of californium-254 has been recorded in supernovae. Image by NASA/CXC/MIT/UMass Amherst/M.D. Stage et al.

Californium was the sixth synthetic transuranium element of the actinide series to be discovered.

It was first produced by Stanley Thompson, Kenneth Street, Albert Ghiorso and Glenn Seaborg in 1950 in California, USA.

The researchers bombarded curium-242 with alpha particles in the 60-inch cyclotron in Berkeley, California. Each nuclear reaction created californium-245 (half-life 44 minutes) and a neutron. Only about 700,000 atoms of californium-245 were produced in the experiment. This number of atoms is enough to make a cube with sides about 27 nanometers long. Chemical analysis proved that the new element had been made. (1)

Californium was isolated in macro quantities for the first time by Burris Cunningham and Stanley Thompson in 1958 at the Materials Testing Reactor in Arco, Idaho by prolonged (five years) neutron irradiation of plutonium-239. Approximately 1.2 micrograms of californium and 0.6 micrograms of berkelium were synthesized. (1a)

Californium is harmful due to its radioactivity.

It is a relatively soft, malleable metal and is easily cut with a razor-blade.

It slowly tarnishes in air to the oxide at room temperature. (2)

Californium-252 (half-life of 2.645 years) is produced in nuclear reactors and has found a variety of uses.

It is used as a neutron emitter, providing neutrons for the start-up of nuclear reactors.

It has also been used as a target material for producing transcalifornium elements. Ununoctium, the heaviest of the elements, was produced when a californium target was bombarded with calcium ions. (2a)

Californium-252 is used in to treat cervical cancer. It is also used to analyze the sulfur content of petroleum and in neutron moisture gauges to measure the moisture content of soil. (3)

Source: Californium is a synthetic element and is not found naturally on Earth. The spectrum of californium-254 has been observed in supernovae. (4) Californium is produced in nuclear reactors by bombarding plutonium with neutrons and in particle accelerators.