Here are 11 interesting facts about gold, one of the earliest elements known to humans, and treasured since ancient times. Its discoverer and discovery date are unknown. You can find out much more on our main gold page.

1. Gold is the most ductile of all metals, meaning it is the most suitable for drawing into wires. Amazingly, one ounce of gold can be drawn into a wire 1250 miles long (thickness 1 micron). This means that you could make a gold wire long enough to go around the earth with just 20 ounces of gold. Using metric units, one gram of gold could be drawn to a length of 66 km.

2. Gold is also the most malleable of all metals, meaning it can be beaten into thinner sheets than any other metal. Gold can be beaten without any special difficulty to a thickness of 0.1 micron. A stack of one thousand sheets of 0.1 micron gold leaf is the same thickness as a typical piece of printer paper.

3. Gold is one of the densest elements. A cube of gold with each side just 14.2 inches long would weigh a ton. (37.27 cm sides give a metric ton.) The six metals denser than gold are: osmium, iridium, platinum, rhenium, neptunium and plutonium.

5. ‘The acid test’ has become part of everyday speech. It means a test whose result is absolutely certain. The first acid test was a drop of nitric acid on metal. Gold does not dissolve in nitric acid, so if a metal reacts with nitric acid, it is certainly not gold. The ‘acid test’ became popular in the 1849 Californian gold rush, when all sorts of shady characters tried their hand at selling fake gold.

6. The total mass of gold ever extracted from Earth is 170 000 metric tons (at the beginning of 2012). This amount of gold would fill three and a half Olympic swimming pools. About 2500 metric tons of gold is now mined every year. Two-thirds of all the gold ever taken from the earth has been taken since 1950.

7. Want to get rich quick? Nobel prize winning chemist Fritz Haber did, but not for personal gain; Haber tried to help the German economy by extracting gold from seawater, but could not do it profitably.

A 1 kg gold bar. Processing seawater equivalent to Lake Ontario’s volume might produce enough gold to make 48 bars like this one. Image by Swiss Banker.

8. As recently as the 1980s the oceans were thought to contain about 4 kg of gold for every cubic kilometer of water – that’s almost 1 kg or 2 lb of gold each for everyone on Earth today. Estimates of ocean gold keep falling, however, and it now seems likely that each cubic kilometer of ocean contains just 30 grams of gold (Nozaki, 1992). That’s 1 ounce of gold in every 264 billion gallons of water.

If you could process seawater equal in volume to draining Lake Ontario, you would capture 48 kg of gold, worth less than $3 million at today’s gold price. You cannot put that amount of water – 1600 cubic kilometers – through any chemical extraction process for $3 million. But perhaps you have an idea? 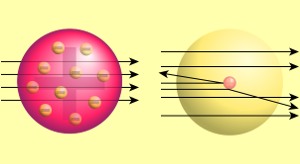 The Gold Foil Experiment: alpha particles were expected to pass through gold foil undeflected (left). In fact, some were deflected (right). Rutherford realized that atoms are mainly empty space, with a dense, positively charged nucleus. The nucleus had to be dense to deflect high-energy alpha particles. Image by Fastfission.

9. In the world-changing Gold Foil Experiment, Ernest Rutherford and his coworkers Hans Geiger and Ernest Marsden fired alpha particles at gold leaf. The experiment found that alpha particles were deflected as they passed through the gold more than they ought to have been if the gold atoms were made of smoothly spread matter.

The gold leaf used in the experiment had been pressed to about 0.6 micrometers thick – that’s a thickness of about 2000 gold atoms. By 1911 Rutherford had concluded that atoms consist of a tiny, dense point of positive charge surrounded mostly by empty space in which negatively charged electrons are present.

10. Approximately 75 percent of the world’s gold ends up in jewelry.

11. In the fourth century BC the Greek mathematician and philosopher Plato wrote: “all the gold which is under or upon the earth is not enough to give in exchange for virtue.”