Here are 12 interesting facts about hydrogen, the simplest and commonest element in the universe. You can find out much more on our main hydrogen page.

1. About 10 percent of the weight of living organisms is hydrogen – mainly in water, proteins and fats.

2. Liquid hydrogen has the lowest density of any liquid.

4. Hydrogen is the only element that can exist without neutrons. Hydrogen’s most abundant isotope has no neutrons.

6. Hydrogen is believed to be one of three elements produced in the Big Bang; the others are helium and lithium.

7. We owe most of the energy on our planet to hydrogen. The Sun’s nuclear fires convert hydrogen to helium releasing a large amount of energy.

8. Hydrogen forms both positive and negative ions. It does this more readily than any other element.

9. Hydrogen is the most abundant element in the universe.

10. Hydrogen is the only atom for which the Schrödinger equation has an exact solution.

11. The first chain reaction discovered was not a nuclear reaction; it was a chemical chain reaction. It was discovered in 1913 by Max Bodenstein, who saw a mixture of chlorine and hydrogen gases explode when triggered by light. The chain reaction mechanism was fully explained in 1918 by Walther Nernst.

Ultraviolet light triggers an explosive chain reaction of hydrogen and chlorine. The video starts at 2 min 25 sec, where there’s a good slow motion view of the reaction. 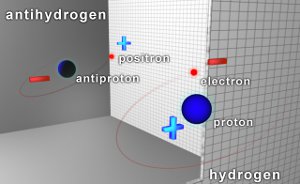