Air is a mixture of gases. Three elements make up over 99.9 percent of the composition of dry air: these are nitrogen, oxygen, and argon.

Composition of Dry Air – The Data 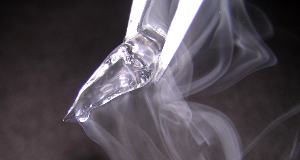 How Air’s Composition was Discovered

In 1674, the English physician John Mayow established that air is not a single element, it is made up of different substances. He did this by showing that only a part of air is combustible. Most of it is not.

In the 1750s, the Scottish chemist Joseph Black discovered that carbon dioxide is present in air.

In 1772, the Scottish chemist Daniel Rutherford, who was actually Joseph Black’s student, reported his discovery of “noxious air,” which we now call nitrogen.

In 1774, oxygen was discovered by the English chemist Joseph Priestley, although two years earlier in Sweden Carl Scheele had discovered oxygen, but had not published his results.

In 1785, Sir Henry Cavendish was dissatisfied with scientific knowledge about the air around us, which was believed to be entirely composed of oxygen, nitrogen, and carbon dioxide.

He knew nitrogen in air could be reacted with oxygen to form, ultimately, nitrous acid. He aimed to find out if ALL of the air that was not oxygen or carbon dioxide could be converted to nitrous acid. If it could, he would have proved that air was entirely oxygen, carbon dioxide and nitrogen.

Cavendish sparked air in a jar with electricity to react oxygen and nitrogen to form nitrogen oxides. He then added additional oxygen and sparked the air again until all the nitrogen had reacted.

Nitrogen oxides are acidic. Cavendish used aqueous sodium hydroxide to remove them from the apparatus. [This would also, of course, have removed any carbon dioxide that was present.] He removed the remaining oxygen using potassium polysulfides.

A small bubble of gas remained. We know now this was mostly argon. Cavendish wrote that this bubble “was not more than one hundred and twentieth of the bulk of the phlostigated air [nitrogen].” (1)

At Least One More Gas is Present in Air

So, Cavendish had learned that air is at least 99.3 percent nitrogen/oxygen/carbon dioxide with a maximum 0.7 percent of something else. We now know that the ‘something else,’ argon, is very unreactive; this enabled Cavendish to find it, but it also prevented him finding out more about it. (The giant advances in spectroscopy made by Gustav Kirchhoff and Robert Bunsen lay 85 years in the future.)

In hindsight, we can say Cavendish slightly underestimated the part of air that isn’t oxygen, nitrogen, or carbon dioxide. Despite this, he was ahead of his time. After his experiment, more than 100 years passed until scientists again began to think that something about air didn’t quite add up.

In 1892 John William Strutt (better known as Lord Rayleigh) announced that no matter how it was prepared, oxygen was always 15.882 times denser than hydrogen. This very precise work had taken ten years to complete.

Continuing to work with great attention to detail, he found that the nitrogen in air was always denser by about 0.5 percent than nitrogen sourced from nitrogen compounds. (2), (3) How could this be explained?

In 1893, Rayleigh wrote to Nature, announcing the problem to the world. (Any scientist who responded to that challenge actually had the chance of discovering a new element. None did!)

In April 1894, Rayleigh wrote an academic paper about the nitrogen problem. Funnily enough, he viewed pure nitrogen, containing no argon, as ‘abnormally light nitrogen.’ He stored it for eight months and retested it to see whether its density would increase. (4)

Rayleigh’s paper awakened the serious interest of William Ramsay, who had already been aware of the problem.

Rayleigh and Ramsay carried out further experiments, keeping in touch with one another about their progress.

Argon and the Noble Gases

In August 1894, Ramsay took air and removed its components – oxygen, carbon dioxide and nitrogen. He removed the nitrogen by reacting it with magnesium.

After removing all the known gases from air, he found the gas remaining occupied one-eightieth of the original volume. Its spectrum matched no known gas.

Rayleigh and Ramsay wrote a joint paper in 1895 notifying the world of their discovery. The new gas wouldn’t react with anything, so they named it argon, from the Greek ‘argos’, meaning inactive or lazy. (5)

In his Nobel Prize winning address, Rayleigh said: “Argon must not be deemed rare. A large hall may easily contain a greater weight of it than a man can carry.” (6)

William Ramsay discovered or codiscovered most of the other noble gases: helium, neon, krypton and xenon.

He was responsible for adding an entire new group to the periodic table. Radon was the only noble gas he didn’t discover.