The reaction rate tells us how quickly reactants → products.

Explosions are the result of very high chemical reaction rates. Explosives are solid chemicals that react very quickly to produce a hot gas, which blows everything outwards.

Not all chemical reactions are created equal.

Some are naturally fast, such as when you put a flame to hydrogen in the presence of oxygen in the pop test.

Some are naturally slow, such as iron rusting in the presence of oxygen and water.

It’s possible to speed up or slow down the rate of a reaction by changing one or more of three things:

You can also speed up a reaction using something called a catalyst, which we’ll look at later on this page.

If we increase the temperature, chemical reactions go faster.

You can see the effect of hot water vs cold water in this video.

If we shrink the particle size, chemical reactions go faster. For example, a lump of steel will not easily burn. Steel wool will burn very easily, as you can see in the video.

The main chemical reaction you are seeing in this video is:

If we increase the concentration of reactants, chemical reactions go faster.

The effect of a high oxygen concentration on burning is dramatic, as you can see in the video. Don’t try anything like this at home!

In addition to the three methods shown above, catalysis may be used to increase the rate of a reaction.

A catalyst is a substance that speeds up a chemical reaction, but is not consumed by the reaction; hence a catalyst can be recovered chemically unchanged at the end of the reaction it has been used to speed up, or catalyze.

For chemicals to react, their bonds must be rearranged, because obviously the bonds in the products are different from those in the reactants.

The slowest step in the bond rearrangement produces what is termed a transition state – a chemical species that is neither a reactant nor a product, but is an intermediate between the two. 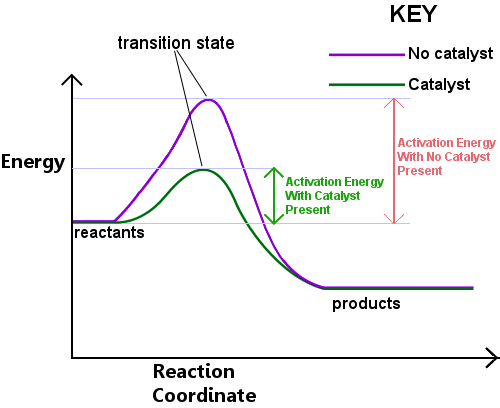 The activation energy can be thought of as a barrier to a chemical reaction, a hurdle that must be crossed. If the barrier is high, few molecules have sufficient kinetic energy to collide, form a transition state, and cross the barrier. Reactants with energy lower than Ea cannot pass through the transition state to react and become products.

A catalyst works by providing a different route, with lower Ea, for the reaction. Catalysts lower the energy barrier. The different route allows the bond rearrangements needed to convert reactants to products to take place more easily, with a lower energy input.

In any given time interval, the presence of a catalyst allows a greater proportion of the reactant species to pick up sufficient energy to pass through the transition state and become products.

Example 1: The Haber Process
The Haber process, which is used to make ammonia from hydrogen and nitrogen, is catalyzed by iron, which provides atomic sites on which the reactant bonds can rearrange more easily.

Example 2: Enzymes
In our bodies, and in other living things, enzymes are used to speed up biochemical reactions. An enzyme is a type of catalyst. Complex life would be impossible without enzymes to allow reactions to take place at suitable speeds. The shapes of enzymes along with locations on the enzyme that bind to the reactants provide an alternative reaction pathway, allowing specific molecules to come together to form a transition state with a reduced activation energy barrier.

The long chain enzyme provides sites for reactant molecules to come together to form a transition state with a low activation energy.

Catalysts cannot shift the position of a chemical equilibrium – the forward and backward reactions are both accelerated so that the equilibrium constant Keq is unchanged. However, by removing products from the reaction mixture as they form, the overall rate of product formation can in practice be increased.

Show Answer
One example is a firework exploding. Another is universal indicator changing color when added to an acid or alkali.
Question 2

In terms of chemical reaction rates, why do we refrigerate food?

Rusting is a slow chemical reaction. Can you think of another slow reaction?

Show Answer
One example is glue hardening. Some glues take several hours to set, although others can set faster than this.
Another example is rubber hoses and rubber bands becoming brittle over time, because the rubber slowly reacts with oxygen and loses its elasticity.