The electron is the universe's fundamental unit of negative charge. It is believed to be truly fundamental, because it cannot be split into smaller particles, and it has no detectable structure. Its symbol is usually e- or β-.

Like all charges, the electron's charge generates its own electric field.

Since the electron is always in motion, like any moving charge, it generates its own magnetic field.

The atoms of every chemical element have an equal number of negatively charged electrons and positively charged protons - they are therefore electrically neutral.

Even compared with protons, the electron mass is small: the proton:electron mass ratio is 1836 (to four significant figures).

The electron is believed to have no diameter and no volume. It is thought to be a point particle.

In atoms, electrons occupy a volume of space centered on the nucleus. Electrons move within a much larger volume than the nucleus occupies.

The difference between these diameters is a factor of about 60,000.

Electron energy levels and their interactions determine the chemical behavior and bonding of substances. Common examples of this are:

During radioactive beta-decay, a neutron decays into a proton. This is accompanied by the ejection from the nucleus of an electron antineutrino and a very high energy electron known as a beta particle, symbol β-.

Static electricity results from the movement of electrons from one body on to another: this separation of electric charge means one body is positively charged and the other negatively charged.

Electric current is the flow of electric charge - usually electrons - although it could be ions. Electric conductivity is based on the ease of movement of electrons.

Magnetism results from the movement of electrons.

The Need for Quantum Physics

In atoms, electrons are bound to the nucleus by electrostatic attraction. In classical physics, electrons should lose energy and spiral into the positive nucleus. If this were the case, atoms would have a very limited lifetime. Classical physics, therefore, cannot explain the existence of atoms. 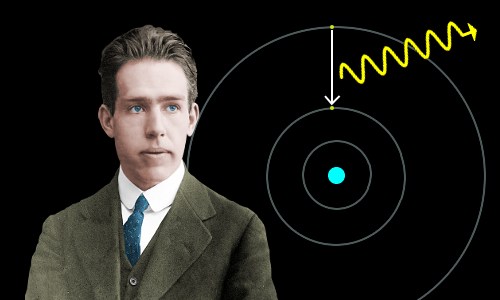 Niels Bohr built the first quantum mechanical model of the atom, which demanded that electrons occupy definite orbits. Light is emitted or absorbed when an electron jumps between levels.

Quantum physics established the principle of wave-particle duality or the matter wave: particles may behave like waves with velocities, wavelengths, amplitudes, and frequencies; and can be reflected, refracted and diffracted.

The wavelength of matter waves can be calculated from the de Broglie equation:

With Ψ and Ψ2 we get three of the four quantum numbers that characterize electrons in an atom or molecule and the shapes and orientations of electron orbitals.

The Dirac Equation and Electron Spin

The Dirac equation, a wave equation for electrons travelling at speeds close to the speed of light, naturally produces the quantum mechanical property of electron spin.

An electron can have spin of either + ½ or - ½. Subatomic particles which can have spin of + ½ or - ½ are called fermions. Unlike bosons, no two fermions can occupy the same quantum state, so they are subject to the Pauli exclusion principle.

Electrons are fermions and obey the Pauli exclusion principle.

Every electron in an atom is characterized by four quantum numbers: n, l, ml, and ms.

The Pauli exclusion principle says that no two electrons in an atom can have the same four quantum numbers: every electron must exist in a unique state. Electrons in different atoms fulfil this demand, because the atoms are in different locations in space.

Electron diffraction methods for determining the atomic and molecular structures of solids rely on the wave behavior of electrons.

Photons of visible light are produced or absorbed when electrons jump between allowed energy levels within atoms.