The aufbau principle says that the arrangement of electrons in an atom - the electron configuration - is best understood if it is built from the ground up.

'Aufbauprinzip' is a German noun; it means 'construction principle.'

When writing down an atom's electron configuration, we begin at the lowest energy level and add electrons to higher energy sublevels until the required number of electrons are present.

We do so in accordance with the Pauli Exclusion Principle and Hund's Rule.

The diagram below shows as many electron energy levels as we need for most purposes in general chemistry, although higher levels also exist. Energy levels are filled from the bottom up. 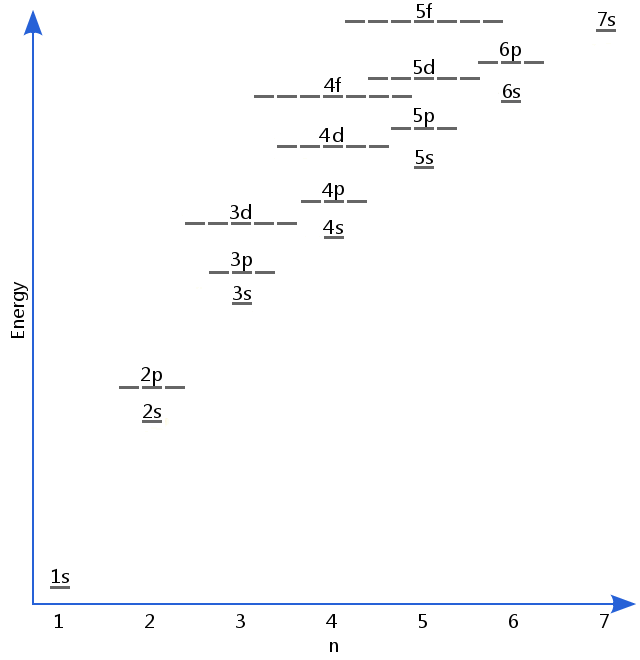 Aufbau and the Elements - Period 1

The simplest element, hydrogen, has one electron. 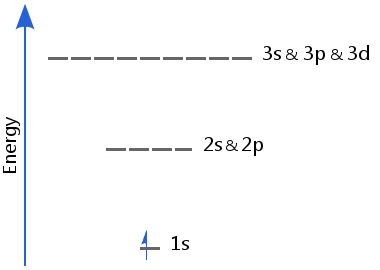 Hydrogen has a single electron. In its ground state, hydrogen's electron occupies the 1s energy level. Note the energy of 2s and 2p are equal for hydrogen - likewise 3s, 3p and 3d. This is not the case for any other element's atoms.

This is hydrogen's ground state. It is written 1s1.

Hydrogen is unique among the elements - it is the only one whose atoms have just one electron. As a result of this, hydrogen has unique energy levels.

One electron is spin-up and the is other spin-down in accordance with the Pauli exclusion principle. This is called spin pairing.

The quantum numbers of one of helium's electrons are:

And the other electron's quantum numbers are:

Aufbau and the Elements - Period 2

Lithium's first two electrons fill the 1s orbital; the third goes into the 2s, which is the next lowest available level. Lithium's electron configuration is 1s2 2s1. 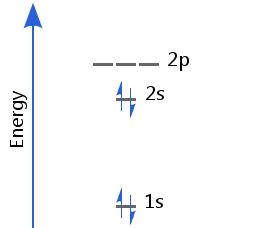 With the 1s and 2s sublevels full, boron's fifth electron occupies one of the p orbitals. Boron's electron configuration is 1s2 2s2 2p1.

The sixth electron enters a different p orbital from the first. In accordance with Hund's rule, the two electrons in p orbitals have parallel spins. Carbon's electron configuration is 1s2 2s2 2p2.

The eighth electron must now enter a p orbital already occupied by another. It enters with a pair spin orientation. Oxygen's electron configuration is 1s2 2s2 2p4.

The ninth electron enters a p orbital. This electron's spin pairs with that of the electron already there. Fluorine's electron configuration is 1s2 2s2 2p5. 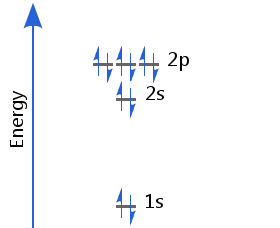 Aufbau and the Elements - Period 3

For the next eight elements, the 3s and 3p sublevels fill until the next noble gas, argon is reached. The procedure is the same as the filling of the 2s and 2p sublevels.

The 3d energy sublevel is considerably higher than the 3p. Therefore 3s and 3p in effect form a closed shell with the result that argon has very low reactivity.

Aufbau and the Elements - Period 4

The order that electrons add to an atom's sublevels is often described using the Madelung Rule, summarized in the diagram below.

Unfortunately, beyond the first 20 elements, the Madelung Rule is unreliable.

For the elements in the fourth row of the periodic table, the 4d and 3d sublevel order requires some explanation. This is provided on a seperate page: The Aufbau Principle and Transition Elements.