What are Ionic Compounds?

Two-element compounds are usually ionic when one element is a metal and the other is a non-metal. Examples include:

Although they consist of positively and negatively charged ions, ionic compounds are electrically neutral, because the charges are always equal and opposite.

(The other major group of compounds is molecular compounds: these consist of molecules rather than ions.)

In its purest form, ionic bonding is not directional. It can be regarded as simple positive-negative Coulombic attraction between point charges. This is different from covalent bonding, in which electrons are shared by atoms, forming directional bonds.

However, absolutely pure ionic bonding does not exist. There is always at least a small degree of covalent bonding character in ionic compounds.

The Formulas and Structures of Ionic Compounds 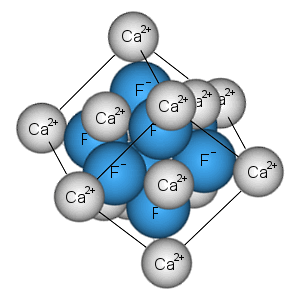 The unit cell of fluorite, CaF2. Million upon million of repeated translations of this unit cell in 3-dimensions produces a visible crystal of fluorite.

In a molecular compound, such as, for example, water, H2O, or ethanol, C2H5OH, each unit of the substance, the molecule, consists of the number of atoms shown in the formula.

In an ionic compound, such as common salt, NaCl, or magnesia MgO, the formula tells us the correct ratio of elements present, but it does not specify the unit. Ionic compounds exist as giant crystal lattices.

Each crystal contains an unspecified number of ions: the numbers are enormous: even a 0.5 gram crystal of sodium chloride contains about 1 x 1022 ions.

The structures of crystals can be understood in terms of their repeating units - unit cells: these can be determined by X-ray diffraction measurements. 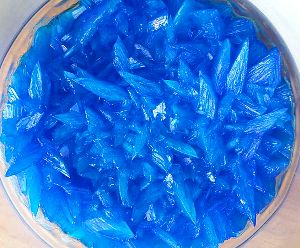 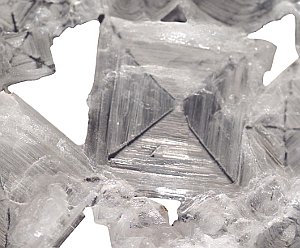 Solvation
For an ionic compound to dissolve, the electrostatic bonds holding the ions in their rigid crystal lattice must be replaced by attractions between ions and solvent molecules. Each ion becomes surrounded by solvent molecules, as shown in the diagram.

Solvation of ionic compounds in polar solvents is driven by a decrease in free energy. 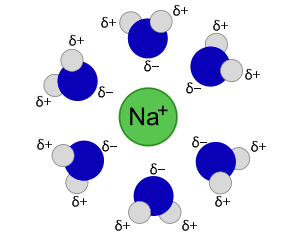 When NaCl dissolves in water, the polar water molecules form solvation shells around the dissolved ions. Here, water's oxygen atoms, each with a slight negative charge, solvate the Na+ 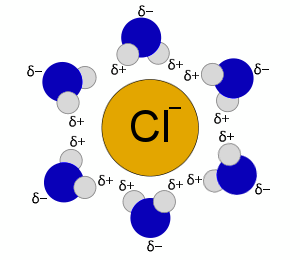 Likewise, the Cl- is surrounded by water molecules with their slightly positive hydrogen atoms oriented to the Cl-.

Bronsted Lowry acids/bases are substances that can donate/accept H+ ions.

H+ acceptors such as OH- and O2- are classed as bases.